Here’s a picture taken with the tiny pocket camera that I always have with me : 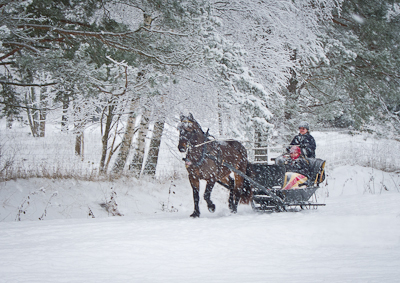 The weather was bad and I was just taking a quick walk on which I didn’t think it was worth lugging my usual 8kg of gear, when I heard sleigh bells through the forest and these guys came galloping past me. I just had time to pull out my Canon S90 and take this shot before they were gone, trailing only the sound of jingle bells.
It was a pretty magical first-of-advent morning, but I would have been mad if I hadn’t caught it on ‘film’.


If I’d had my DSLR with me the result would have been sharper, less noisy, and I could have taken several frames and chosen one where the position of the horse’s hooves better showed how fast they were going, but I didn’t, and that’s where pocket cameras come into their own. They can always be there.


The downside of pocket cameras is that they have tiny sensors that show more noise, especially in poor light, and can’t handle as much contrast as bigger sensors. The cameras tend to be slow to respond too, have limited frame rates, and make terrible indoor portraits if you need to rely on the built-in flash. But for static subjects in good light, A4 prints can be embarrassingly similar to the result from cameras costing and weighing 10 times as much. It’s also way cheaper to buy an underwater housing for a pocket camera. They are good for close-ups given their large depth of field, and I often grab my S90 for a close-up even if I’m carrying my DSLR, just because it’s quicker and easier and the results are so good. And a less technical advantage is that people find them less intimidating – no one has ever refused to let me shoot them with the S90, but if I have the big Nikon they often get suspicious of my motives, and sometimes just refuse.


Since all my other gear is Nikon I would have liked to stayed with them so that I would get less confused moving between different menus and button layouts, and could use my big automatic flash, but for the last few years Canon have simply been way ahead on the pocket camera market, and the S90 was the first model that I considered to have sufficient quality in a small enough body to be worth buying. It’s replacement, the S95, is very similar, but has higher resolution video.


Here are some more S90 examples.

Update 2014 : The S90 has finally been eclipsed after an impressive 5-year reign.
I now use a Sony RX100-II, which has significantly better image quality, but even better, it doesn’t have the shutter lag of the Canon.
Here’s a selection of pictures from it : RX100 examples.