Back from a trip to Oman that I won with a photo from last year’s holiday in Sri Lanka. 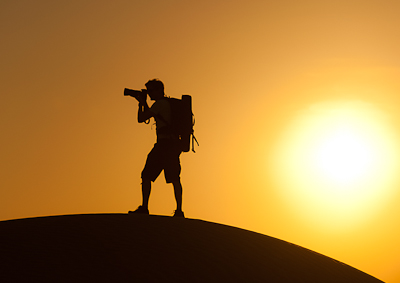 The most photogenic area of Oman has to be the sand deserts that were a few hours north of our hotel in Salalah, but unfortunately we only had one night there, and with sunsets only lasting a few minutes down in the tropics, it was intensive work to make use of the golden hour, which would have been more like the golden half hour without all the sand that acts like a giant warming reflector. The silhouette picture you see here wasn’t planned – the guy just happened to be on the next dune between me and the sun, and I simply asked him to pose in profile. But I liked the pic, and so gave him my card later so that I could send him a copy, at which point I discovered that he was the editor of the magazine through which I had won the holiday. A mix up with seating on the plane also meant that I ended up sitting next to him on the flight home, and now it looks like I might be able to get some work through him in the future. Now what are the chances of all that happening ? And on my first day as a full-time freelancer too. I think someone up there is giving a giant thumbs-up to my career change.
You’ll find more pics and a quick report of the trip here : Oman photos and trip report